The secret powers of chocolate milk 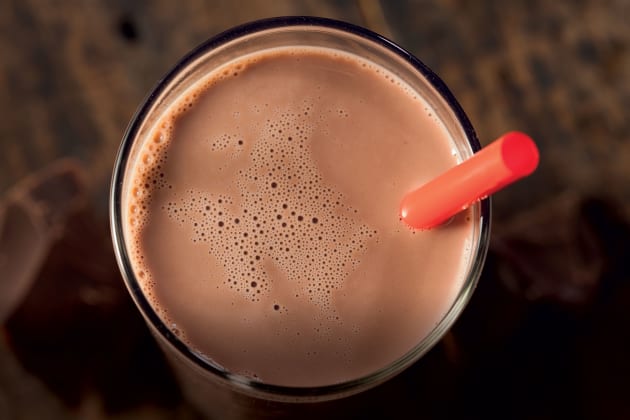 Mo Farah has a penchant for chocolate milk after races and intense training sessions, but far from being a rare moment when the double Olympic champion strays from his almost monastic nutritional regime, this is actually a vital part of his post-run recovery programme.

The explosion of research in sports science over the past decade has allowed elite athletes to approach every aspect of racing in minute detail in a bid to gain even the smallest of edges. And as unlikely as it sounds, there is a growing belief that a humble bottle of chocolate milk may be the best recovery drink out there: “We now know that chocolate milk has the ideal carbohydrate-to-protein ratio, which your muscles require to replenish glycogen levels,” says Kelly Pritchett of thedepartment of foods and nutrition at the University of Georgia.

The surprisingly revitalising qualities of chocolate milk were only discovered by accident. A scientific study looking at the best beverages for post-exercise rehydration was supposed to pit the finest electrolyte sports drinks on the market against each other. Nine elite cyclists were taken through a series of glycogen-depleting exercises, consuming various recovery drinks in between, while a handful were given just milk as a control to gauge the relative benefits of each drink. But in an unexpected twist, the cyclists on milk outperformed their rivals by a considerable margin.

Initially this was thought to be a fluke, but sports scientists from a variety of different institutions have since repeated the experiment with similar results. Chocolate milk contains a three-to-one ratio of carbohydrate grams to protein grams which appears to enhance glycogen replenishment, as well as far more potassium, calcium and vitamin D than most sports drinks. Crucially, chocolate milk also appears to be naturally tuned to human digestive systems – the dairy-intolerant or allergic clearly notwithstanding – containing exactly the right balance of fast-absorbing proteins such as whey protein (which pumps essential amino acids into the bloodstream promoting muscle growth and repair), and slow-absorbing proteins such as casein (which keeps amino acids in the blood stream many hours later, reducing the amount of muscle breakdown).

In response, the manufacturers of Gatorade and other similar post-exercise thirst quenchers have attempted to copy the optimal carbohydrate-protein ratio found in milk, but even with their upgraded products, they cannot outperform the real thing.

“The key thing is there are still no studies which have found chocolate milk to be inferior, so it’s always either equal or superior to your over-the-counter recovery drinks,” Pritchett says. “And from a cost standpoint, on a weekly basis you’re looking at maybe £7 a week versus up to £24. So it’s more economical.”

While it may appear that the chocolate is only there to make it taste nice, the extra sugar actually plays a key part in ensuring you’re getting the post-exercise recommendations for carbohydrate: an 8oz glass of chocolate milk contains about 30-35g of carbohydrate compared to just 12g in normal milk.

With athletes including Farah constantly seeking ways to push the boundaries, several studies have also investigated whether alternative milks such as almond or soy may prove even more effective recovery beverages. But while it was found neither contains the optimum balance that makes low-fat chocolate milk ideal – with soy lacking the carbohydrate content and almond lacking the requisite amount of protein – this research did reveal that timing is crucial.

“In order to enhance recovery, the key is to get the carbohydrate and protein you need in the first two hours after exercise,” says Pritchett. “We say this is the window of opportunity, as the ability to replace muscle glycogen is boosted during that period when you have increased blood flow going to the muscles. If you wait longer, it could take more time to restore your natural levels.”

Chocolate milk has also been found to be an excellent drink for runners taking part in intense multi-day endurance events. Last September, 52-year-old Tom Denniss, a mathematics researcher from Sydney, broke the world record for a round-the-world run, completing more than 600 consecutive marathons to cover 26,000km in just 622 days. Denniss firmly believes that chocolate milk made a huge difference to his ability to clock up the miles without sustaining injury: “To recover I just sat down at the end of each day, and before the day started, and I’d mix up a litre of chocolate milk,” he said. “I found that was really important for hydration. I had always been a reasonably big milk drinker anyway, but I thought that was just me, just what I liked. It turns out it contains exactly the right sodium, potassium, calcium and magnesium electrochemical balance which the body requires for the muscle synapses to fire.”

Denniss’s route took him across five continents through some of the most remote locations on the planet, from the Andes mountain range to the Nullarbor desert, and he admitted that the ready availability of milk proved to be a godsend.

“You can’t be too precious about anything because you never know what you can find. You can’t rely on electrolyte drinks, as those won’t be available when you’re running through the Malyasian jungle.”

Such challenges put a vast calorific demand on the body – studies on Tour De France cyclists show that they need to consume around 7,000-8,000 calories a day to maintain performance levels. Actually eating that amount of food is nigh-on impossible, which makes chocolate milk again ideal.

“Chocolate milk is a very effective recovery beverage especially when doing something like multiple marathons back to back,” Pritchett confirms. “You’re not going to be able to recover if you can’t get in the carbs and the protein, and the nice thing about it is that it’s convenient and it’s an easy way to get something in if you find you don’t want to eat after exercise.”

Send Us A Message If You Have Any Inquiries!

You are now subscribed, thank you!

There was a problem with your submission. Please check the field(s) with red label below.

Your message has been sent. We will get back to you soon!